After a great week of training, an appointment with the endo which saw a lot of changes in the management of my diabetes and a 50 mile ride the day before, Sunday called for InsulinDependence's Los Angeles Dawn Phenom which just happened to be a 5k race.  (Dawn Phenom's are group exercise get together's, it helps to promote the group and allows group member's the opportunity to socialize with one another.)

The previous day's ride took a lot out of me, I woke up a little sore and tired, I didn't really expect much from the race but this is good for the training.  Running with heavy legs and a tired mind will only help me during the run portion of a hard triathlon or longer race (or even life).  I woke up with a blood glucose of only 67.  I felt a little low but it wasn't that bad.  I went straight to the kitchen for my prerace sandwich, PB on wheat.  No insulin and 30 grams of carb had my blood glucose up to 140 less than an hour later.  Let's face it, race or not the 'betes isn't going to keep me down.

Drive up the PCH (Pacific Coast Highway) to Zuma Beach (20 miles north in Malibu), register and go back to sit in the truck.  God I love being up early.  No new emails, nothing important on the radio, just the peace of the morning.

Checked the BG: 140.  It went a little higher over the next 15 minutes but nothing big, I bolused 0.5 units to stop the rise.  Let's face it, I love the calm of the morning but I can't sit still, so I get out and start wondering.  Looking to see if anyone else from InsulinDependence/Triabetes showed up yet.  Didn't find anyone.

More runners start showing up and the sun is now almost completely over the Malibu Mountains. 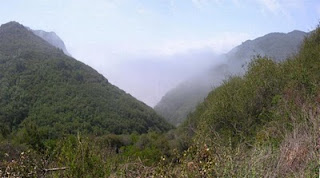 Check the BG again, 220, so much for stopping the rise.  I start eating a Powerbar, I eat about half and bolus.  Warm up run time.  1.5 miles later I feel awake, I was worried about the soreness until that point, now I was completely awake.

At this point I found Peter Nerothin (founder and president of InsulinDependence), he drove up from San Diego for the event.  I always love conversations with Peter, there is constantly something to learn about diabetes from him, not to mention finding out how InsulinDepedence is progressing.

GOAL: On the watch, under 23:00 minutes.  Real mental goal, new PR.  Come on!  I just started this 5k running stuff, I've only been doing "true" speed work for two months, I can PR.  My mind is in the way though, I'm sore, tired and not mentally prepared.  I can hear Hartman (strength and conditioning coach in college) right now "get your head right". 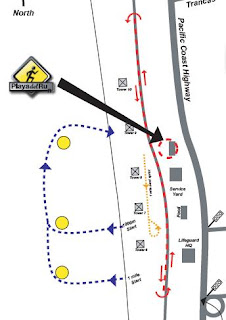 As you can see on the map, it's a two turn around course.  Flat, fast and on a "not so wide" bike path.  I saw the southern half on my warm up run but didn't know much the northern half.  Once the race started it seemed to go further north than I thought it would.

Shots fired!  Race is off!

My legs are so heavy at this point.... All I could think was "just get through the last mile".  I followed a guy in front of me, I mean he pulled me the last mile and a half.  I knew if I stayed on him I could keep his pace to the finish, if I let him get too far out, I would fall apart.  Crumble.  "Quitting lasts forever".  Not happening.

Final blood glucose: 323... Dang!  The Powerbar had obviously fully digested and the gel as well.  The adrenaline of  race probably kicked it up a lot too.  Even though I wasn't fully "up" for this race, just before the start I feel all the adrenaline hitting my body, at first it gives the feeling of a low blood glucose (at least for my 'betes) then as the gun goes off I know it's just the adrenaline.  Either way, the race is over, I bolus and it goes down.

Overall, the race was good, it hurt during the race but my time keeps getting faster.  20:53 is nearly a complete minute faster than my previous PR, it keeps me excited to keep racing and more fit.

Special thanks to Peter Nerothin for coming up to San Diego and getting up at 4:00AM for the dawn phenom.
Posted by Unknown at 8:37 PM