Had my first triathlon this last weekend.  Rising at 4:45 my first blood glucose (BG) reading of the morning was 176, the night before I had a big pasta meal which ended up in a low right before bed (81 but obviously going down according to the CGM).  The 32 gram Gatorade ended up bringing it up right away which allowed me to go to sleep.

I had a peanut butter sandwich (45 gram), gave a normal bolus (however, I did not take symlin which I normally do for three meals a day, this is something I need to practice more during training rides before trying it on race day).

Drove to the event and after setting up transition I took my BG again (about 80 or 90 minutes later).  146, pretty solid.  I thought it could be higher since I hadn't had symlin but it wasn't.  (I am learning that the symlin does seem to hold over once it's in your system, it's when you stop using it completely that it stops working.)

I had a powerbar (45 grams) at that point, didn't have any insulin.  I wanted to wait to see where it would go.  I had to go set my pump in transition so I knew after this I wouldn't have any balas.  The race website said waves would go off every three minutes, I was wave nine.  That means at 7:27 I would start my swim.  So I put my pump in transition at 6:30, about one hour without insulin before the swim starts.  Well that was the plan anyway.

Swim started at near 8..... well I didn't die at least but that is going to take a lot of work.  Got out, one thing I learned is to take my BG right before getting on the bike (good luck with that, I'm too competitive to slow down like that on a short race). 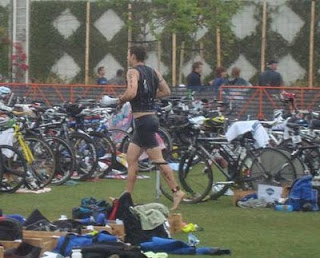 I took my BG about four miles into the bike, 280, I had a gel (22 grams), gave myself 2 units, knowing I would have another one soon.  In the last mile of the bike I had another gel along with more water. 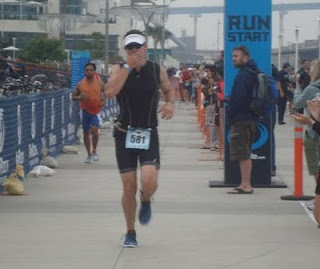 Finished the run and was done with the event.  Solid finish, happy with the race overall.  The biggest thing is that I need to improve my swimming.  My BG after was 240.  That's fine with me, overall I'd rather have it lower but for a short race where cramps and dehydration won't be an issue that's completely fine.  So the 'detes didn't stop me.... 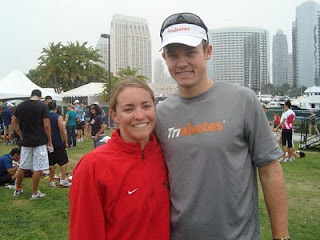 Special thanks to Jamie for getting out of bed early and going with me (and taking all those pictures).
Posted by Unknown at 9:17 PM