The training week was... alright.  Not the best and definitely not what I want.  I had two workouts in which I had to stop for a low blood glucose (BG), once while running, another while swimming.  It pains me to do this as this is really when the "I hate being diabetic" thoughts come to mind.  I try to stay positive in these moments, "maybe if you weren't diabetic you wouldn't even be working out".  I really believe that my obsession with fitness is due to the diabetes.  I understand how hard it must be to stay motivated when you don't have the 'betes as I do.  I see instant results.  On days that I don't workout, I need vastly more insulin than days I do.  Days with a really hard workout, lets say a "brick" workout, I need even less.  Normal people set goals such as "I want to lower my PR" or "I want to lose 10 pounds", when those results don't come, they become discouraged.  It's much easier for me to understand the biological benefits of working out instantly.  (Plus, runner's high isn't bad either.)

Both of these workouts were my second of the day, I never have problems with workouts in the morning.  I simply wake up, carb load and reduce my basal and I'm good to go.  My initial thoughts are that my afternoon basal rate is too high on a day's that includes a second night workout.  Tomorrow I have a second run scheduled at night so I'll reduce my basal starting at around 2PM or 3PM until the workout which will be at 6PM or 7PM.  This will make less insulin active in my system for when the workout starts.  My feelings are this is where most of the problem stems from.  The insulin that is still in my body from my mid-day snack and the basal rate instantly gets kicked into gear once my night workout begins, bringing my BG down quickly, faster than the morning workouts.

As my running and eventually my triathlon training has really stepped up over the last year, I've needed far less insulin.  During college I understood the importance of reduced basal and carb loading before a workout but not like I do now. Studying these effects like my night workout basal rate and the meter I use is what really brings my diabetes into focus.  I really do suggest that any diabetic question everything, "why this meter and not that one", "is there a better pump out there for me", "what new insulin's have been developed lately".   In my opinion, this is one of the biggest problems diabetics face, comfort.  Much like the couch potato doesn't want to go for a run, a diabetic on injections doesn't want to change to the pump.

As any diabetic runner/ triathlete knows, sometimes you need to take your BG while on the run.  The CGM is great but frankly you need instant results (especially with the Minimed CGM).  For those of you reading this that aren't diabetic it's really hard to explain the difference between an adrenaline rush and a low blood glucose, they can give the same feelings (at least for my 'betes).  All of the sudden that excitement hits you and my first thoughts run to "is this a low sugar or adrenaline?".  (Really though it doesn't matter, adrenaline messes up the blood glucose in such an odd way that a runner or any athlete should take a reading at this point.)

While running my favorite meter is the TRUE2go, it's typically sold as an off brand meter.

As you can see by this picture, it's perfect because it's small. Because of it's size and having the meter/ test strips in the same piece, I find that it's great to run with (so far my record is maintaining a 7:30/mile clip while testing the BG).

However, typically in my "everyday" life I use the OneTouch UltraMini (I also use the OneTouch on my bike as it fits perfectly on the aero bars) but have found that sometimes I really like using the TRUE2go during the day as well.  I can throw it in my pocket with a lancet and go (o the irony with it's name). 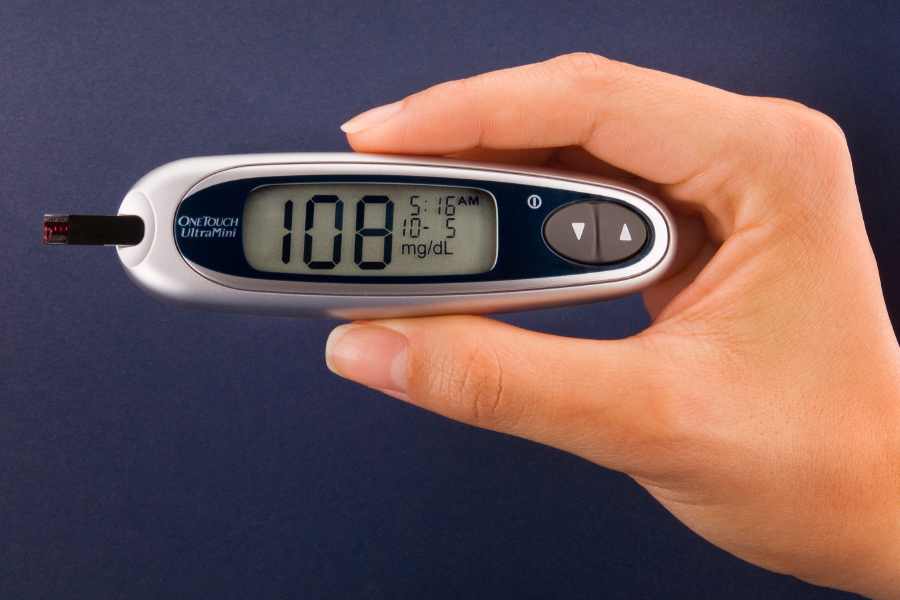 Most people with the 'betes know that the OneTouch UltraMini is accurate.  I think every diabetic magazine has given more praise to this meter than an Elvis fan praising the King at Graceland.  Recently however, my endo made comments about the TRUE2go.  "You only use that thing to get a semi-accurate picture while running right?".  No, I stated, I like my little meter and use it a lot actually.  Heck, the FDA approved the device.  I decided to investigate.

Below you can see my little study.  After twenty three (23) readings with the same blood sample.

So on average the TRUE2go and UltraMini were within twelve (12) points of each other.  Well within the FDA's 20% range.  The median is even closer.  I did find that the readings tended to be different on rapidly raising or falling blood readings, accounting for a difference in the average and the median.  (This could have been from the sample itself since blood that comes from the finger first isn't always as accurate as the blood that comes out after.)   This justifies in my mind my use of the TRUE2go but also tells me the device could be off a little, which means I will keep using it the same way I do now, TRUE2go for runs, UltraMini for daily living.