After a fun Thanksgiving Thursday where of course I ate too much food, I had a 10k race on Saturday.  Actually, Jamie and I both did the race together.  I found two separate 10k's that were on Saturday of the long holiday weekend and then she selected between the two, opting for the one closer to San Diego than Los Angeles.

As usual, I had my pre-race peanut butter sandwich (which I am sure as soon as Jamie reads this she will laugh at), going with a normal dose of Novolog insulin as this "meal" was two hours prior to the race.  Two things I did not take into account however, (1) that my blood sugar was already at 185 when I woke up (I know, I know that's a little high for the morning, but let's be honest, holiday weekends aren't a diabetics favorite) and (2) I didn't take any Symlin (which typically requires that I take less insulin).

It took Jamie and I an hour to drive to the race, once we got there registration had already begun.  We even got passed walking to registration by a woman who was yelling at her kids to walk faster while her husband told the children, "hurry, hurry, mommy is in a different zone right now".

We got our race number, put the timing chip on our shoes and waited.  I could feel that my blood sugar had gone a little higher than I wanted, so I took my blood sugar and bolused.  This is definitely something to remember for the future, I either need to take the Symlin or give a little bit more of a bolus when eating my PB sandwich upon waking.

The race began and I think both Jamie and I found out the course was much more hilly than we had expected, however it went through the vineyards of Temecula, on pavement then on tractor track then back to pavement and back to track.  The course ended with a very steep climb to the finish (I think that finish really killed a lot of people but some how I felt a surge going up it meaning I have a lot more in the tank for a flatter course). 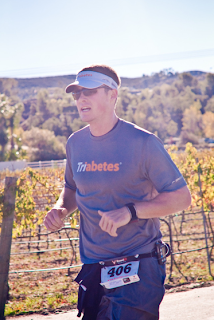 I feel I was able to keep a good pace and the pre-race nutrition (a total mix of 50 grams of carb, the typical amount of carbs I have before any run under an hour) along with a small bolus to correct the high blood sugar all ended in a good result.  I found that I enjoy a 10k much more than a 5k, as one is not in the lactic threshold zone the entire time but am still moving quick enough to feel my legs become heavy and my lungs burn a little.  As a result I ended with a 44:50 (7:12 pace) which was 27th place overall, this was faster pace than I had initially thought in my pre-race plan.  I think the next 10k race with less hills, better planning on the diabetic end and the prior knowledge of pacing will end with even better results.

I also believe Jamie was happy with her result as she went well under the pace she thought she would, getting 13th overall in the women's category.  I think she is hooked though, after the race she said to me in the car, "I think I'll really like longer race".  No kidding, anyone that really likes swimming the mile for fun must really like longer endurance events!  Great job Jamie, thanks as allows for going with me.