On Sunday of this last weekend I was able to compete in the Oceanside Open Water Swim, going one mile around the pier.  My biggest fear going into the Orangeman half-iron distance race in September is the swim.  Not only the length (1.2 miles) but the fact that I will be battling the ocean waves.  The ocean itself does not scare me (luckily, I know a lot of people struggle with this), it's the exhaustion from the waves during the swim that makes me fearful.  What should one do if fearful?  Face it.

Recently, I have tried using Levemir as my basal and my pump for bosuling only.  This is a 12-hour insulin, this means a pump's bad infusion site won't ruin your day.  It works well, however 12-hours is a serious commitment but it's nice not worrying about having insulin on-board during a swim.  It's covered from the previous night's injection.  That is, if you give yourself enough.
The night before the swim I didn't give myself a full dose.  I didn't want to wake up low or have a low going into the swim.  Having cycled three hours with Jamie the previous day I thought a slightly lower injection would still cover it.  I was ... wrong.  This is one of the problems with Levemir, if you miss, you miss.
The morning of the swim I woke up at 283.  Alright fine, a little dehydrated but nothing bad, it's only a mile swim.  Bolus and be fine, right?  Wrong again.  Adrenaline.  Eat, bolus again.  Just before the swim?  380.  Great blood sugar.
This is the closest I've ever come to the start line and pulled out.  When the race director announced it was low tide and there were sting rays I had almost had it.  Then I thought about how lucky I was just to be able to be out there and how I would be letting the diabetes win.  I went in. 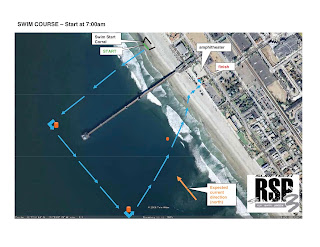 Straight out, turn left, around the pier, turn left again and in.  It seemed like forever.  Waves crashing, the earth shaking.  Yeah, yeah, that might be a little dramatic but it felt like it!  I knew I was dehydrated the entire time but I still made it.  35 minutes actually.  I was happy.  I wasn't last, I wasn't first.  But you know what?  I feel a lot better about ocean swims.
Prior to the Orangeman Triathlon, (the half-iron distance that I am considering my "A-race" of the year) I am now signed up for two more open water swims in the ocean.  A daunting 1.5 mile swim in the La Jolla Cove and another one mile in Oceanside.  By the time Orangeman rolls around I will be able to see myself exiting the swim before the race starts.
In my mind's eye, Horatio.
-Shakespeare
Posted by Unknown at 6:07 AM