Wait how far is it? You want to do what? You have to volunteer to even get a spot in a race a year away?

Yup, I've heard it all in the last month when I told people I was going to drive to Phoenix, volunteer on Sunday then get up early to wait in line to sign up for an Ironman that is a year away. After having anxiety about getting a spot, I was able to sign up with the golden ticket, a bright green volunteer t-shirt. (The other spots sold out in less than ten minutes online.)

Despite being nuts and wanting to do an Ironman (2.4mile swim, 112mile bike, 26.2mile run) I still had to volunteer to get "priority" sign up because it sells out so fast online. 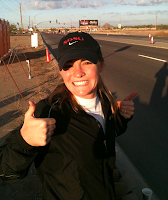 Jamie and I volunteered at Bike Aid Station #1 early Sunday morning after cruising over to Tempe, AZ on Saturday. (Jamie was kind enough to go over to Arizona for the weekend with me.) Volunteering turned out to be an excellent time, seeing the pro's whizz by and having a few laughs with other people starting their Ironman journey. Having gained Willy Wonka's Golden Ticket (the bright green shirt) we woke up early to stand in line before the sun rose and signed up.

As we entered the registration tent Jamie almost broke and signed up with me. She didn't end up pulling the trigger, wanting to get a few more races under her own belt. We will get her though, St. George May 2013.

Peter and Blair (co-workers at Insulindependence, Peter the founder) also came over to Arizona to volunteer at a different aid station. Over the last few months Peter and I have been asking Blair to race with us, she finally broke and signed up. All three of us Type 1 Diabetics will have a great experience on the journey together, not to mention the other people at Insulindependence that signed up including current captain Jeff Temple and club manager Gary Schmidt.

Time to build that bike and swim base. Let the journey begin!

Two roads diverged in a wood, and I--
I took the one less travelled by,
And that has made all the difference.
Robert Frost