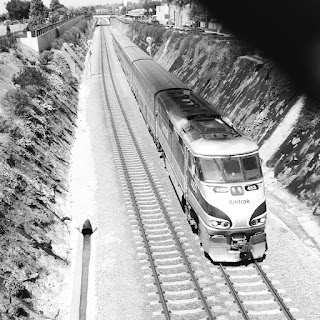 Do you ever see a train and think "what if it went off the tracks"? Many times the best laid plan just gets off the track. A penny gets thrown on the tracks then the "3:10 to Yuma" becomes stalled out. The thing is when the engine is on, with the plan to go to Yuma by 3:10 the engine is still hot.


My big race in May got cancelled about two weeks ago. No more long course race in the first half of this year. It saddens me because of the work I've put in; the long rides on Saturday's, the swim work, the running.


As soon as I found out about the cancellation I started searching for a new race on the same weekend. It came down to three choices;


I remained the ever sane conductor, choosing the Orange County Triathlon. The good news is there was a race in the area that same weekend. At least they waited to cancel the race until this near date. I'm staying on the same training plan, getting the good base miles in for Ironman in November. I'll stick to the plan, peak for this race then rest over Memorial Day at home in Wisconsin.

Though, the epic race was in Vegas, I'll miss that trip (my diabetes won't)!

Ben Wade: So, boys - where we headed?
Byron McElroy: Taking you to the 3:10 to Yuma day after tomorrow.
Tucker: Shouldn't have told him that.