Standing on the starting line of a triathlon I want to tell you a story.
BAM! Too late.

Gun goes off. People, bodies, triathletes, all hitting the water. And my first thoughts are; "why don't I just become a cyclist. Why not just ride. The bike is fun."


Let me put it in terms everyone can understand. Go outside. Look at the beautiful day. Start running, only three seconds after you start close your eyes. Only open them for a brief moment every three or five strides. That's what open water swimming in triathlon is like.


Except now imagine you're running with your eyes closed and people are bumping into you. That's more what it feels like. But wait it gets worse. Once in awhile some idiot puts his hand on your head and shoves you under. You just suck in water! Gasping for air you curse the day you decided to do this. That's what it's like at the back of the swim pack.


I actually like swimming. Master's is fun. Master's is safe. No one shoves you under there. During an actual event you can't see anything. You're wondering what you're doing in the water. Wondering why you don't just do duathlon or why that's not more popular, no one actually likes swimming open water. It's true, ask. Most just survive until they hop on their bike. 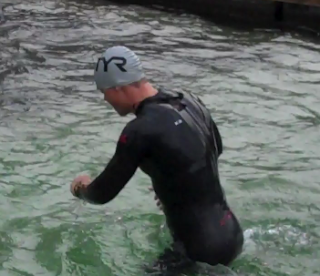 Today was one of those days. It felt like it was never going to end. As I finally got to the first buoy, which by the way felt like forever, I started to draft off a guy that was going a similar speed (slow). I thought I'm just going to follow this guy in, not work hard anymore, relax until I can get on my bike. Then, a gentleman I would like to call Joe Athlete decides to put his hand clear on my head and put me under. Like a pirate walking the plank I regret the day I got into this mess. I suck in about as much water as my mouth and lungs can hold until I was able to get back to the surface for some much needed air. By this time it's too late to catch the guy I was drafting. I weaved and bobbed my way to the swim exit, the whole time wondering how the heck I will finish an Ironman swim.


I finally get out of the water, check my watch. A horrendous time! Run up, dazed and confused to get on my bike. Of course after a bad swim, you can never get your wet suit off properly. It was my left leg this time, after what felt like forever I stroll out to the bike course. Clip in and start pedaling like Fred Flintstone.


Now after sucking in all that water, it isn't super pleasurable being on your bike. You're disoriented. You just want those first two miles to be over with when you know your stomach might feel a tiny bit better. Up and down hills those first two miles we go until I finally feel pretty good. Wondering what my blood sugar is I check that. 153. Score, perfect.


At this point I still don't feel good enough to take in nutrition. Up and down more hills through Orange County we go (which, by the way is not as cool as everyone thinks). Up and down, shifting and pedaling. Until I finally take in nutrition about thirty minutes into the bike course. I down my first gulp of nutrition and look forward to the rest of the day.


We make the turn around. The course took all the athletes to this rocky road, which horses must frequent often judging by the tracks and ... other left overs. Bumpy, bumpy, bumpy road we go. Going around the bend, all the sudden my back tire seems flat. A hissing noise I hear. This can't be good. We get back to the normal road, I pull over.


Flat. Dead. Down. My rear tire flatter than a pancake.


What's funny about this is during the morning in transition I said to Jamie; "I might as well take my spare tube out, the race is pretty much over if you flat in an Olympic or Sprint distance". Sure enough. Jinx be had. I was flat. 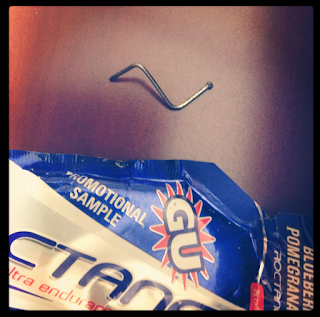 I set my bike down. Took the back tire off. Took the tube out. Get the CO2 ready. Then I realize I better figure out what caused this inconvenience. I put my hand all around the tire, which by the way was a GATORSKIN, the equivalent of a police officers bullet proof vest. I find what you see to your right. A rusty, dirty nail, bent all to heck. I'm sure it was in some future Kentucky Derby winners foot at some point. It took some time to simply remove it from the kevlar tire just so I could end this madness. I just stared at it for awhile. Dang thing ruined my race.


At this point I wasn't in any rush or even in a bad mood for that matter. I saw Joe Athlete passing me. I realize at this moment it's an accomplishment factor to finish now. DNF or death. Not that I'll ever be on the podium but I want to do the best I can do, not stare at a rusty nail in my tire. I took my sweet time, changed the tire and stood my bike back up.


It's at this point I realize that I had set my bike in some disgusting dirt. My entire bike chain and cassette is covered in this bile. I take what is my old tire tube and start cleaning my bike chain with it. I look around at the people passing me and realize; this is one of those moments in life you wish you had on film. I am cleaning my bike chain with a dirty old tire tube out in the middle of God knows where just to finish this race where I'm probably not going to do well anyway.


As soon as I get back to cruising my first thought is; "why didn't I check my blood sugar, that was stupid". O well, I feel fine. That took forever. It probably didn't take the five hours it seemed but things go in slow motion during events like this. I was taking my good old time, I wasn't in any rush. It's an Olympic distance, this race is now basically over. I'm pedaling along, thinking "am I even going to run in this race". I realize that the second transition in this race is separate from the first so Jamie won't be there. No choice. Have to make it home for dinner.


I start to take off my bike shoes while still pedaling, which are also covered in dirt now, to enter the second transition. As I roll in, hop off my bike, let's be honest I pretty much walk. Yup, I was going slow. Taking my time, I know it's a race but it didn't feel like one anymore.


O look, all the bikes in my age group are back. Just great, just great. Sat down, throw on my shoes, I'm in some gravel so that's all up in my shoes. Then I think "wow I haven't drank anything since thirty minutes into the bike, I better drink before this run".


I take down about twelve ounces of cabro-pro. As soon as it hits my lips I realize how stupid this is. Now my gut is totally full and I have over six miles to run. Smart move Brennan, smart move.


I begin my journey up and down the hills of Orange County some more. Check my blood sugar, 150. Perfect, again. Outstanding. At least that is going well. Over windy bike paths and narrow bridges. My gut hurts and I'm running next to a 70 year old man, showing my lack luster pace during the first mile. I look over, he's probably thinking how he would have kicked my a** at my age. He's right, this is pathetic. I pick up the pace despite my stomach pains. A good move that will serve me later in my triathlon career I believe.


Then. Mt. Everest. At least it seems that way looking to the top. I start to walk. Sir Edmond Hillary next to me keeps running. We are going the same pace but he is huffing like the big bad wolf. It's okay Joe Athlete, you can walk this one to the top. Your heart rate is too high for this one. Sir Edmond and I get to the crest, he just about has a seizure and I start running again. 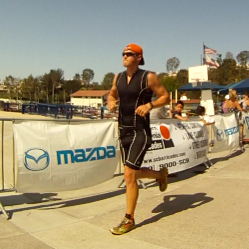 Over more bridges and hilly terrain to the long downhill finish. I debate if I will cross the line or stop where I see Jamie. I don't want this result online nor do I want the medal for this dreary effort. Medals in triathlon are the adult version of the one we all got when we were six playing soccer even though our team was defeated. Only as adults you have to swim with Joe Athlete, bike over a rusty nail and run with Sir Edmond to get it. Thanks for coming, thanks for giving us your $150 entry fee, here's a medal, have a beer.


By the time I realized, it's too late. I'm in the finishers shoot high-fiving all the kids. I cross the line like Usain Bolt and look for my championship prize. Nothing. Only a volunteer to take my timing chip. Shoot. Blood sugar is 126. Perfect diabetes day.


I look for Jamie, get a kiss, show her the nail and she smiles. She points to the area with food. They have cookies.


The kiss and cookies are better than the medal. I still won. I am lucky. Thanks for the support Jamie.


"Better if he had said something natural like, "Jesus, here we are.'"
-Sir Edmond Hillary on Neil Armstrong’s famous first words on stepping on the surface of the moon.
Posted by Unknown at 4:19 PM