(Written on a plane from Seattle to San Francisco, posted whenever you see this.)

This weeks training was a little interesting and unique. I traveled for work to Ragnar Northwest Passage on Wednesday afternoon through Sunday (when this blog was written on the plane). Before the trip I tried to squeeze every last drop of life out of training that I could. Long swims of 3,700 yards and 4,000 yard on Monday and Wednesday mornings, along with a recovery bike on Monday evening then put in a good thrashing on Tuesday.

I decided to finally try Sergio's Tuesday brick workout (bike plus transition run). I've avoided it because you have to bring your bike along with trainer, turns out not to be that big of a hassle. It ended up not being that tough on the bike but on the run after. Particularly "Debbie's Hill", a hill that seems like Mt. Everest when running up the side at full blast as Sergio instructed.

Unlike last year, I was not a registered participant. Only the chaperone/driver of one of the vans for the Ragnar journey. With a 10:00am start time on Friday and no finish insight sooner than mid-day Saturday I planned to run along side someone as the weekend progressed. I ran on an eleven mile leg with another person with diabetes named Scott from Spokane, Washington. Over the past five years Scott has done five Ironman's so I had a lot to ask him about making the eleven miles go by quickly as the sun set and we avoided near crashes with cars along farms in Northern Washington state.

Then Saturday came with nearly no sleep (two hours in the drivers seat of a van).  I weighed the cost of running another leg. My blood sugars were going up and up from the lack of sleep along with excessive snacking on "fake" food in the van so the exercise would really help. Though, I couldn't help but remember when my IT band was tight for some time following Ragnar last year. It's not the running that will kill you, it's the stiffness from the van with the body at 0% then straight to 150% of all engines go.

Despite how badly I wanted to exercise and knowing it would help my diabetes I decided against running. I weighed the cost benefit of running another three to six miles against the risk of injury, with the ultimate goal being Ironman it just wasn't worth it. The basal rate on my pump would just have to increase 20% until Monday's workout.

Now that it's Sunday, despite the fluctuating blood sugars I realize what a good decision it was not to run. My hips are tight just from sitting in the van and sleeping there. Sleeping for two hours right after an eleven mile run in the upright position probably didn't help at all! It's also a firm reminder the key exercise plays in blood sugar "forgiveness". 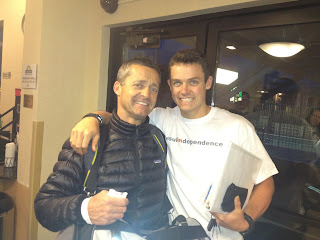 After the race at dinner I sat next to Bill Carlson which is always an experience. His years of endurance along with diabetes knowledge just spewing out. We talked about what he thought an A1c reading should be when training and how to manage blood sugars. Bill has done more events than most humans could ever imagine and long before it was the "sexy" thing to do; Ironman's, the Leadville 100 (a 100 mile run at elevation in Colorado), a 2:39 marathon (in Los Angeles) among many others.

Hopefully at least twelve hours of sleep tonight then a good ride tomorrow.

"You better put your foot in the door or it'll get slammed shut."
-Bill Carlson at dinner
Posted by Unknown at 7:18 PM