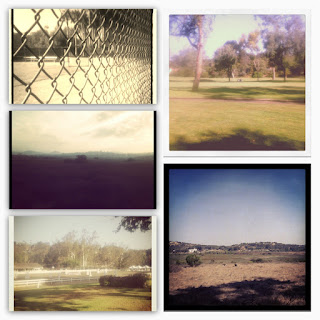 On Saturday morning I ran 2:15, I really suffered the last 30 minutes from lack of water. I didn't bring any and planned to just stop at a few fountains but it didn't end up being enough with the humidity and lack of breeze recently. On the last mile of the run a buses exhausts fumes felt GREAT (I kid you not, true story). Finally a breeze, only to realize what was blowing on me is normally hotter than everything else.

I took some pictures on the run. The trail I use for longer efforts is beautiful. Complete with lagoon, little league field (where I get water), equestrian field and golf country club. Not to mention ocean views at the beginning. The plastic bag over my phone distorts a few pictures but you get the idea.

Sunday was long ride day. Five hours planned riding with James and Blair. A lot of climbing inland to the East. James ended up riding the full 4,500 feet summit up Palomar Mountain when Blair and I turned around. 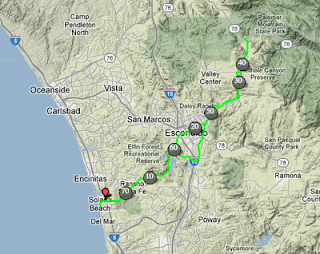 The ride took close to seven hours with a few flats and the usual water stops. Blair was like one of those semi's getting its tires shred across lanes of traffic with three flats. She had to get a pick up to a local bike shop in Escondido with no more spares between us and the patch kit done. The last 90 minutes was just me.

During the ride I had 134oz of water and 225 carbs. Not counting the 20oz water and 60 carbs before hand. Instead of shutting off the basal rate (background insulin) like I do during shorter rides I put the basal at between 30-40% with small boluses (injection insulin) before eating. Below is the elevation and heart rate along with blood sugars and boluses (no CGM today).

I believe some of the length of stops is what caused the 253 but never can be sure. Everything I ate was whole, real food. No gels on this and my stomach felt great the whole time. The potatoes with olive oil and a ton of salt was the highlight. Next time I'd like to have more carbs, around 60c/hour (ride time) and a tiny bit more bolus insulin.