Carlsbad with Jamie and Brooke

I'm one proud future husband. Jamie and her sister Brooke ran the Carlsbad Half-Marathon this last weekend with Insulindependence. It was Jamie's third year running and Brooke's first running race ever. This year I worked the mile two aid station with volunteers of the organization.

First of all, volunteering always gives me an appreciation of races. It reminds me that when I race people don't need to be there supporting you, they could all be in bed, not dressed up like a pirate (James Stout picture below). 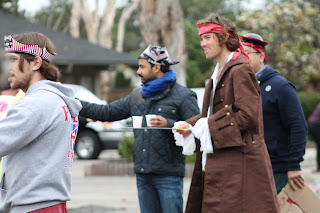 This was the first year in three that I wasn't running. Luckily I opted not to run with the current sad state of my ankle. Jamie has been working hard for the last four months building up her miles and I think she is making that switch from running hurts to I look forward to running. I know it took me a long time to get to that place but once you do; it's amazing.

Brooke has never run in a race before but she was both a swimmer and played water polo at San Diego State like Jamie. In the months leading up to the race she kept telling Jamie and I how much she would have to walk. Let's put it this way though, she swam her senior year with a 90% shoulder tear, she can suffer, we knew there wouldn't be much walking.

In private conversations Jamie and I talked about how Brooke would really "get it" after racing. Until a person has done a race, one can't really explain how it is so much different than a training run. It's too hard to share the feelings at a start line until you have been there yourself. It can't be compared to competing in college because it's open to anyone and it's much more of a shared competition rather than a fight to the death. You share the experience with other people that have jobs, a life, stress, problems; all the things bring the racers together are beautiful. It's hard to explain but all I know is that I love athletics.

Jamie ended up with a PR'ed in the race. She only has better times to come. She pushed through the last two miles not feeling well and a heart rate through the roof (literally, in the high 190's... you read that correctly, 190's!). 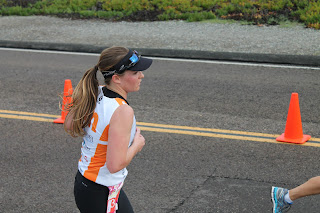 Brooke, as we guessed, hardly walked despite as she puts it "having no idea what [she's] doing and hardly trained". By Sunday night she was already texting me other races to do. 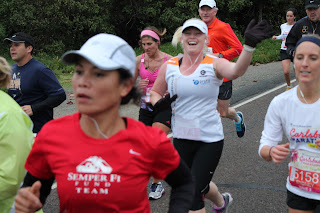 More importantly Brooke and Jamie raised close to $500 for Insulindependence, which will help support the Junior Captains program. They both went above and beyond themselves to support others while racing. If only everyone of the 8,000 people racing did that.

As I said; I love athletics. I can't even put it into words what that totally means. Few things give me as much satisfaction as riding my bike or the feeling after a long run. A race even brings greater joy. Not only the race but being in that atmosphere and talking about it after, the idea itself is almost as great as a workout or race.

Brooke taking up he challenge to run her first race means I have another person to share that experience with. She has a lot of guts to pound it out like that.

I couldn't be prouder of Jamie and Brooke.